THINK LESS, CREATE MORE - NANOWRIMO WITH A SIDE OF PI 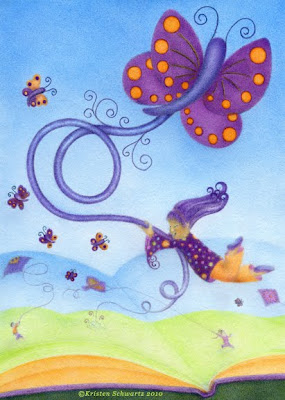 My theme this month is...brainless or more accurately, "thinkless". I'm tired of the thinking process getting in the way of my creativity. Lately, thinking has been freezing me in my tracks and threatening to make my work stiff and lifeless.

Being someone whose brain is usually on overdrive studying, organizing, crunching numbers, scheduling, analyzing, problem solving, editing...I'm constantly trying to figure out how to make things work better, take less time, be more productive. It was time to STOP!

This all started last month when I decided to do an illustration for the SCBWI Spring Spirit Logo Competition. I had 3 weeks. No time to waste. After looking at all the roughs for projects I had done over the last two years, I was interested to see that I really liked the very first ideas I came up with on each one. Most of the time I didn't stick to the first idea when it came to making the final. Instead, I worked and worked and tweaked each one many many times. I decided for this project, I would do an experiment. What would happen if I didn't analyze my sketches to death and threw caution to the wind? What if I took the first idea and went for it - as is? So I did. It was liberating - much faster too and it was peaceful to do something without the inner critic chattering away during the entire process. "Lalala...I can't hear you..." The critic was annoyed at first, but she found something else to do.

After the illustration was finished, I wanted to keep going. At first, I thought (oops, it's a difficult habit to get away from) I would call this, "using my intuition to guide my work", but that didn't seem right. Intuition is derived from the Latin intueri which means to look inside oneself or contemplate. I already do too much of that. I wanted to abandon contemplation and empower the action part of the brain - more like breathing, which just happens if everything is functioning correctly.

(Stop right now and think about your breathing. Are you doing it right? Try to describe to someone how to breath step by step. Can you do it? It's enough to make you hyperventilate.)

So here's what I proposed for November - to work instinctively. Someone told me once that humans no longer have instincts. You know what? I don't care. When you look at the origin of instinct, it fits. Derived from Latin instinctus: inspiration; the act of drawing in a breath; to excite to urge forward. Perfect!

I couldn't have come up with a better time for my creative binge either because it's NaNoWriMo - National Novel Writing Month. It has been 5 years since I participated in this challenge to write a 50,000 word novel, but the best way to do it is to write, write, write and write some more without letting the brain edit. Just go with the initial idea and play it out through the characters. They'll let you know where you've gone astray and you can take care of it later. It's a lot like sketching - only with words.

But what if writing 50,000 words wasn't enough to keep me from thinking too much? Well, it's also PiBoIdMo - Picture Book Idea Month - a challenge to come up with a picture book idea a day. It doesn't matter if they're amazing ideas. Maybe one of those imperfect ideas will lead to one that's even better. 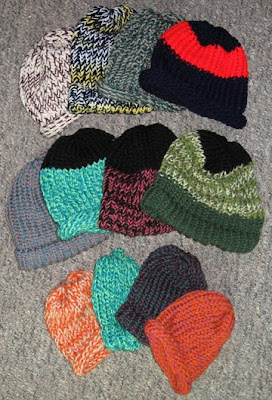 My plan was coming together nicely, but I could still feel my brain trying to think. Then it came to me. November is also Caps for Kids month here in Tahoe and my daughter and I always challenge ourselves to knit or crochet a hat or two a day for that. Put a project in my hands and turn on a movie while it's snowing. More mindless creativity and for a good cause too!

Why stop there? I was on a roll. I pulled out an illustration I've been hating and not finishing for two years now! With the critic on vacation - it really doesn't look bad. And who cares? It's time to finish the darn thing. I can edit it digitally if I need to. I'm sure I have other illustrations on the back burner that need to be put out of my misery. Strike while the critic's out!

Two thousand plus words a day, picture book ideas, finishing illustrations, knitting and crocheting hats - who has time to think? It's going to be a productive month.

So, forget the Latin origins - the Greeks said it best. You know...Nike?

Email ThisBlogThis!Share to TwitterShare to FacebookShare to Pinterest Posted by A Journey Illustrated at 11:45 PM 4 comments