This year at the SCBWI Spring Spirit Conference, illustrator/writer/instructor, John Hendrix gave us permission to fail. In fact, he suggested we do our best to fail at least 10 times. It's actually a requirement in his Illustration and Communication Design classes at Washington University. I love that. I had a couple illustration teachers in college who taught that it wasn't okay to fail - even on an honest attempt at an assignment - especially if you were usually highly successful. I was one of the unfortunate students who presented early in the semester with pieces the teachers really liked. They sang their praises and it felt great.

I later learned that I would receive a rather personal wrath from those same instructors when I deviated from my successes to experiment with new ideas. That felt really bad and discouraged me from experimenting freely. I have been back on that uneasy ground for the past two years experimenting with new ideas and techniques. Last year I did 5 new pieces for my portfolio and I only feel that one was a success. It was hard to pull the failures from my portfolio after all the work I did, but I learned a lot in the process.

For this conference, instead of rushing to create a new batch of illustrations, I decided to make what was staying in my portfolio even better. I took a cue from Eliza Wheeler, 2010 winner of an SCBWI LA Conference mentorship and 2011 winner of the LA Portfolio Showcase. Eliza blogged in 2011 about how she improved her portfolio based on feedback she received. The pieces I decided to keep in my portfolio were already ones that I really liked (that's important) and I had gotten feedback in critiques from art directors on how to make them better.

In order to improve these pieces without touching the originals, I had to perform digital surgery - some of which involved (gasp) new techniques for me. I've been doing minor edits for years, but decided to branch out. And you know what? It worked! The faculty at the conference viewed our portfolios and put sticky notes on some of our illustrations. All of the notes I had were on pieces I improved and all were positive...except one. It looks like I'll be pulling another piece from my portfolio. I've been told to pull it before and I did, but I tried to save it one last time. Against my better judgement, I put it back into my portfolio after trying to resuscitate it. I find it really appropriate that it was John Hendrix who declared it a fail - but he also said one of my other pieces was "weird and charming" which is one of my favorite bits of feedback yet. "Weird and charming" was an experiment from a couple years ago and will be staying in my portfolio. I hope to add more weirdness and charm in years to come. In fact, I wouldn't mind in the least if people started describing my work...or me...as weird and charming.

On a side note, while improving my portfolio, I decided to redo my website (again!) to better reflect what I do. My offerings have been morphing too. I've been working hard to only do the work I love most, so I'm featuring book design and layout more prominently. Check out the new look of my website and my new children's illustration portfolio.

If you'd like to have a reminder that failure is okay - check out these mini Failure is Required sketchbook/journals by John Hendrix.
Email ThisBlogThis!Share to TwitterShare to FacebookShare to Pinterest Posted by A Journey Illustrated at 11:30 AM 1 comments

CHILDREN'S PUBLISHING: The Long Journey to Illustrate for Children 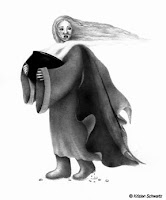 This month marks the Four Year Anniversary of this blog and my journey to learn everything I need to know to become a children's illustrator. It hasn't been easy. There have been highs and lows and everything in between. My family has sacrificed a lot. My paid working hours have given way to long unpaid hours at the drawing board and although I've done my best not to affect family time while working intently on my portfolio, I know I have.

Hitting this milestone has made me reflect back, not only on my journey into children's publishing, but on the years leading up to it. After thinking about it all, I'm surprised I continued on, but that's how determined I am. It has been both fantastic and uncomfortable...

LOOKING BACK:
2000
After my daughter was born I decided to give up freelance illustration and focus, instead, on her. She was right beside me at 6 weeks old as I illustrated my last book. I had a non-creative part time job to fill in the gaps and continued selling my illustrations as cards and prints.

2005
That was fine for a long time, but then job drama began to suck the creativity out of me. On the side, I had occasional clients, but I missed bigger projects and more than anything, I missed working on books. I joined the Society of Children's Book Writers and Illustrators. I'd been thinking about it for a few years and thought illustrating children's books was something I would like to do.

2007
Funny how things happen. I was just comfortable enough not to follow any real dreams and that's right about when my part-time job began to disintegrate. Suddenly I was very uncomfortable. What did I have to lose? In June 2007 I jumped ship to paddle the lonely waters and go back to pursuing a full-time living on the creative side. I had a plan. I set up local art shows, workshop schedules and began looking for clients.

Unfortunately, two weeks after I quit my job, there was a major wildfire in our town that destroyed or damaged over 300 homes and other structures. Several thousand people were evacuated. It devastated our tourism economy along with my big summer art show plans, but a rep approached me, wanting to sell my illustrated cards across California. Design clients also began trickling in and I started to relax a little bit. 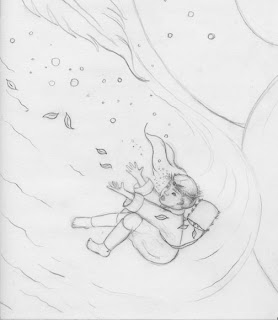 But not for long! In October, on the 5 year anniversary of my husband's hire date, he and his coworkers were notified that their department would no longer be needed(!).

Inside I was panicking like nobody's business, but I held more tightly to my paddle and kept going. Clients and opportunities kept coming, but the only illustrating I was doing was for myself. I really wanted to illustrate more books - especially children's - but… I didn't know how to illustrate children's books and that meant I would have to do some really hard work. It would be even more difficult than finding clients. So, I didn't.

2008
But you know, if you want to do something badly enough, even if you don't tell anyone, it has been my experience that someone will come and find you and put those wishes right in your face for you to confront. And that's exactly what happened. I finally had to face the fact that I really wanted to illustrate children's books even if it was going to be hard to start over and learn everything I needed to know. So, in December of 2008, even though it was terrifying, I applied to the Mentor Program with the Nevada Society of Children's Book Writers and Illustrators.

2009
I was accepted into the Mentor Program which marked the beginning of my dedicated journey into children's publishing and the start of this blog to chronicle and share the process.

PRESENT DAY
Four years of intense study is now finished. This summer I made the decision that I would get back to work bringing in new clients instead of letting them trickle in by themselves while I toiled at the drawing table.

Does this mean I'm no longer working on my children's illustrations? Not on your life. I'm just working differently. My dedication to new clients is in the forefront. Working on my portfolio takes up less time and no longer feels like a second and sometimes third job. This means, I have a life again. My portfolio has a life too, as it circulates through the publishing houses...

Email ThisBlogThis!Share to TwitterShare to FacebookShare to Pinterest Posted by A Journey Illustrated at 8:56 AM 2 comments

Riding the Train and Doing "Nothing"

Over the holidays my daughter and I took a long train trip to my mom's house - 18 hours there and 18 hours back. I was horribly burned out and was looking forward to the down time. I actually thought I would indulge in some reading, but I read exactly 10 pages the entire time. I did some sketching in the lounge car, but mainly I inhaled the scenery - the factories, the ocean, the backyards. It was amazing. So many things to build a visual story from. I let my mind wander into the sound of the train clicking over the tracks, into the gardens and clothes lines, across the ocean and then… for some reason there were elephants - everywhere - for the rest of the trip. They were leaping(!) in the meadows, walking on the streets, flying over the ocean. (Have I mentioned I really needed a break?)


It was like hitting the reset button for my ridiculously over-burdened brain. My daughter may have been a bit tired of the elephants by the end of the trip, but she was a really good sport and we laughed at the elephants until we cried - one of my favorite pastimes. (Laughing until crying is one of my favorite pastimes - not laughing at elephants. I have never found them particularly funny. They seem rather stately - most of the time...) 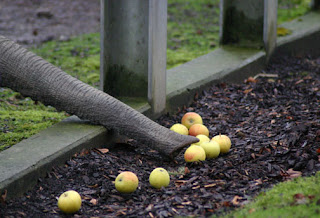 I'd say it was time well spent with my almost 13 year old and I felt refreshed and ready to get back to the drawing board when we got back home. You may soon be seeing elephants too, but possibly only if you go to the zoo or come back to my blog… or take a train trip...
Email ThisBlogThis!Share to TwitterShare to FacebookShare to Pinterest Posted by A Journey Illustrated at 11:18 AM 17 comments