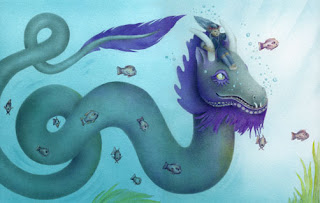 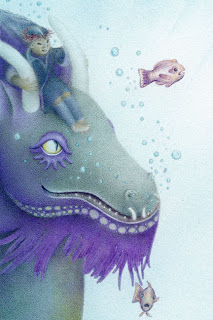 Last weekend I attended the Society of Children's Book Writers and Illustrators (SCBWI) Spring Spirit Conference in Rocklin, California. A week or two before a conference you will find me building and re-building my portfolio based on direction from the invisible Art Director that lives in my head. The problem is that this AD is currently overloaded with too much general information she has collected over the years.

Here is a portion of the collected guidelines on what to include in a children's illustration portfolio:
My AD drew from these guidelines, along with every bit of feedback ever received. She donned magnifying glasses as spectacles and as the days wore on, zeroed in closer and closer on areas which needed improvement. She finally short circuited.

It's no wonder that two days before the conference, I lost my insight altogether. I needed a fresh start with specific feedback on my work - directly from publishers, but this type of information is not easy to come by. Luckily, I signed up ahead of time for every critique possible that was offered at the conference. So, I fired my AD and closed my portfolio. I didn't open it again until I placed it on the display table at the conference. It was time to hear what the professionals had to say.

Critiques opened with samples of promotional postcards that a dozen of us submitted. They were projected on a wall as Kristen Nobles of Candlewick Press went through each one. It was incredibly informative. You can see the image I submitted at the top left of this post and, based on her specifications, my revised image on the right. Postcards are so small that she suggested most images be enlarged and cropped to show the most interesting portion.

Later on, Mary Rodgers of Lerner Publishing Group and Kristen Nobles graciously viewed our portfolios to give us feedback and reveal the ones that stood out for them. What made this feedback even more meaningful was that it was given to the entire group. They both went through their notes on each illustrator and gave strong and weak points as they pertained to each publishing house. We learned a lot from everyone's work.

It didn't actually sink in for a couple days that my portfolio was chosen by Lerner as Best of Show. It is very validating on a journey like this, after submitting my work to many publishers, to hear good news - or any news for that matter. 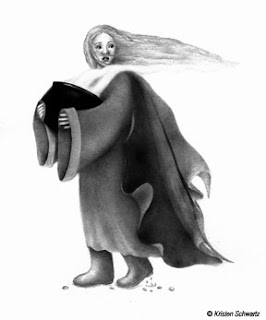 Kristen Nobles told me which of my pieces was, for her, my standout piece (shown to the left). The irony? It was a piece my crazy AD wanted me to remove from my portfolio two days before the conference.

I also signed up for and received a written critique on my picture book. I now have page by page comments to sort through and some work to do. I feel rich!

The other day one of my friends asked me what all this feedback meant. Nothing...unless I act on it...which I'm doing now. I've written up a plan of action and although I know that every illustrator isn't right for every publisher, I'm very hopeful that I'm on the right track. If she behaves, I might even let my crazy AD come back and help...maybe...

Join me on my new Visual Artist Page on Facebook
Kristen Schwartz on Facebook
Email ThisBlogThis!Share to TwitterShare to FacebookShare to Pinterest Posted by A Journey Illustrated at 10:28 PM