Reality is a bendy thing. I often forget just how pliable it can be. I spend a decent amount of time making sure I'm presenting the facts accurately in what I say and what I illustrate. That's probably why I didn't last long in advertising.

One of the functions of an illustration is to pick up the slack where words can't go. Sometimes photographs or videos are necessary when a true story is beyond words. Take the story I've been telling about the dog we adopted this summer. I keep trying to describe the amount this dog drooled in the car, but I can't seem to do it justice. I have to show people—like this…

When I created illustrations for court cases or botanicals for books, the facts were really important, but now I'm illustrating an entirely different world—a pliable reality. Plodding through this new world has opened up many questions about how to complete the assignments presented to me. I explored this quite a bit in Mira Reisberg's illustration workshop this summer. As usual, she gave me an assignment designed to challenge me—"Two page spread, Mad Hatter's Tea Party, all characters are animals. Go!" (She didn't really say "Go!" I threw it in as an embellishment. I'm trying to use one of the things Mira taught us in class—"Don't let the facts get in the way of a good story." See how big my problem really is?)

I was definitely up for the challenge. I had never illustrated animals in anything but a true to life context. Even when I put a sea turtle in Yen and the Great Serpent, it was doing exactly what a sea turtle was capable of doing and nothing more. I had a surprising amount to wrestle with in representing animals at a Mad Hatter's Tea Party. I needed to become clear on how I would do this, so I began by studying many many picture books featuring animals and put together a list of things that were important to me: I was opposed to dressing animals in human-made items or having them in positions that were stiff and unnatural. The surface they were seated at had to be one that could naturally occur in their surroundings. All the animals had to be from the same geographical location. If they were eating and drinking it had to be in a way that could really happen given their natural way of moving. What they drank from had to be from their surroundings. My stipulations went on and on, even though I relaxed a few of them by the time I began sketching. With so many rules, I was stifling myself and making things more difficult, but I didn't realize it until I began going through the critique process.

I came up with a concept and composition that I liked and I was almost ready to begin the final when Mira offered a suggestion. "Those animals need to look like they're having more fun. Put some happy expressions on them."
(I think I may have gasped at that moment.)
"You mean…smiles?" I responded nervously.
Mira quickly put tracing paper over my sketch and demonstrated by putting a smile on my chameleon. Inside I think I may have been shrinking away in horror, but I put on a facade of easy acceptance and readied myself to add expressions to the faces of the other characters later. I thought, If that's all it will take, I can do this.

But that wasn't all. No…it got much more difficult for my feeble reality-based brain to grasp.
"And you need to show the lemur's tail…" Mira drew a tail on the tracing paper to show where it could go.
(I think I may have lost consciousness momentarily as all the blood drained from my head.)
"Oh no no no. This type of lemur doesn't have a long tail," I insisted. "It's an indri. I chose it because it is the largest of the lemurs and proportionally it fits best with the other animals. These lemurs also make a strange howling sound which…" I realized everyone in the room had glazed over. I sounded absolutely ridiculous. Clearing my throat, I said in a much smaller voice, "OK. I'll find a different lemur to use…one with a long tail." Now I had it…or so I thought.

Several days later I went to San Francisco with Mira to attend a gathering of children's writers and illustrators and she wanted to make sure I was clear about the importance of my lemur. "You know that lemur has got to be really cute," she said.
"I know. I changed it into another large type of lemur with a long tail."
"With a striped tail?" Mira asked hopefully.
"No. It isn't a ring-tailed lemur. Those are smaller. This is a sifaka."
"Put stripes on it's tail," she interrupted.
"I can't. Sifakas don't have striped tails," I pleaded.
Mira's disbelief and exasperation were pretty clear as she laughed slightly and commented, "You know, this isn't a scientific illustration. You're allowed to embellish."
"Oh," I said sheepishly.

I hadn't thought of it that way. The irony was that the entire time I was working on this project I had been disappointed that the kind of lemur I was illustrating didn't have a long striped tail. I had become a prisoner of a reality I had created. What Mira was telling me was obvious and I understood it, but like most extremely obvious things…it took a while for it to sink in.

I think I've got it now. This illustration took me on quite an interesting ride, but once I relaxed the rules I made up, a new world began to open up for me...one that is pliable, where anything can happen... 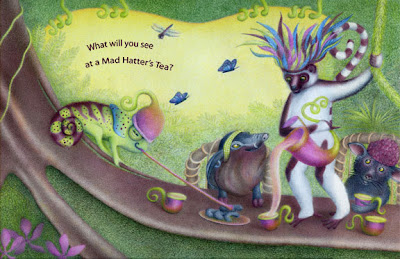 Join me on my new Visual Artist Page on Facebook

Email ThisBlogThis!Share to TwitterShare to FacebookShare to Pinterest Posted by A Journey Illustrated at 1:20 PM

New comments are not allowed.