THE POWER OF THE RIGHT CRITIQUE: A PORTFOLIO CRITIQUE WITH MARLA FRAZEE 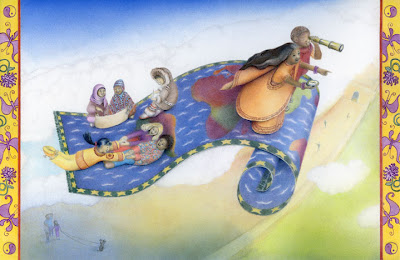 In my past portfolio critiques I have received nice compliments on my technique, composition and palette. In the end I usually hear something like this, "Keep doing what you're doing. Soon you will be published." I must admit - I float away from critiques like this with a special shiny feeling, but that soon gives way to the nagging feeling that something fundamental is missing from my illustrations for the children's market and finding "IT" would set me free...

A good start:
My critique with Marla Frazee at the SCBWI LA Conference was different from any other critique I've had and it was by far the most useful. In 20 minutes Marla learned about my illustration background, assessed my work and gave me direction.

The tip of the iceberg:
Marla said, "If you hear something 3 or more times about your work, really pay attention to what's going on." I hear over and over that my palette is unusual, unique. I heard it again from Marla. It's always a relief to hear that my palette is alive and kicking. The many color theories I studied in college totally confounded me - as did every other art theory. Thankfully, my palette is a completely intuitive part of how I speak visually. Chalk one up to my quest for "IT".

The gift:
Marla went on to talk about the same aspects my other critiques have in the past, but then she gave me a priceless gift. She identified the best pieces in my portfolio (seen in this post), why they were the best and why I needed to do more pieces like them. She saw a departure from generic character development in them and said, "Elevate the rest of your portfolio to the level of these pieces." It was then that I realized what these three pieces had in common. I hadn't relied on photo references to develop the characters. I was inside every one of the characters as I drew them - making the movements, feeling the emotions and making adjustments until - as Marla puts it - I recognized them. 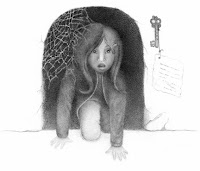 Afterward:
I left my critique with a little bit of that special shiny feeling, but it was different this time. I wasn't floating away. My feet were firmly planted on the ground. I received confirmation on my movement away from photo references and into a new world that resides solely in my head. I love this place, but I had no idea anyone else would enjoy it too. There is something fundamentally solid and comforting about that that isn't in the least bit shiny. In fact, it is a well weathered place with a rather unusual patina and the most interesting cracks. It's a place I want to hang out in...and draw...

Email ThisBlogThis!Share to TwitterShare to FacebookShare to Pinterest Posted by A Journey Illustrated at 9:30 AM

New comments are not allowed.