WHEN ALL ELSE FAILS - THROW A TANTRUM!

If you've ever run long distance you know that you can't burn through all your energy in the beginning and expect to finish strong. Pace is important. During this program I have worked steadily - though I wobbled for a short period of time by not taking days off. The winning formula has been 12 hour work days with days off - completely off. The rhythm has been a good one; 4 hours client work, 4 hours picture book project, 4 hours current portfolio piece. Life gets even better when I can combine my work with my daughter's activities. Many days this summer I could be found at my outdoor studio on the grass outside the Rec Center pool while my daughter swam like a fish and made up games with new friends. Except for the bugs that became unwelcome characters in my storyboards, those were some of my favorite days. Swim days are over now and I'm back to my indoor studio exclusively. What does this have to do with tantrums? Read on...
............................................................................................................
Two weeks ago, Yuyi and I connected by phone to discuss my first storyboard for the finished text. She had a lot to say. The pacing of the story and the way the text was broken down for illustrations was fine, but there was work to be done within the tiny thumbnail images of the pages.

Storyboards are not foreign to me, but the ones I did in the past were very different. When I learned how to create storyboards in college, we did them for commercials. (After all, I would be going into some sort of advertising career right?) After college I did them for court cases to take people through specific scenarios. There was no place for embellishment in these boards - just the facts.

I brought this mentality to the storyboard I sent to Yuyi. All I can say is she is being very patient with me while I shift gears from functioning in the adult world to communicating pictorially with kids. The images I sent her were a literal representation of the words in the story - period. I drew Yen, her grandfather, the water spirit, the Great Serpent, and the benevolent river turtle. Big problem. They existed independently of their environment. There was no sense of where the story was happening. I considered the surroundings in the story to be an inconsequential backdrop. Not so. Yuyi said I missed an opportunity to convey emotion. I left out a very crucial character. I remembered Jane Yolen talking about the importance of setting at the April Conference. She was speaking as a writer, but it is the same for illustrators.

Readers need to be pulled into a scene so they can go there. If there is no there to go to, the readers are gone. I concentrated solely on my characters and figured I would throw in background details in the big illustrations. Yuyi said the river, trees, and sky can all help convey the mood of the scene and in a sense are characters themselves.

Yuyi also encouraged me to throw a tantrum. Finally! Permission to do what only children have dared to do. OK, it wasn't literal...I don't think. This was offered as a way to get into my main character's mind so I could better position her entire body in line with her emotions. When I'm illustrating I often picture a character and their movements in my mind or move myself to get a gesture or expression, but there are a lot more characters to "be" in this project. Not only did I have to "be" the main character, but there was the grandfather, the water spirit, the turtle, and...the Great Serpent! I often listen to book audio while illustrating. This helps create another world for me to travel to while I work. For this project I made sure the book I listened to had serpent-like creatures in it to help with the emotional tone. This made it less necessary to "be" a giant river serpent on city property.

The other thing about my storyboard was that it was emotionally subtle. I hadn't realized that. Probably because I am subtle myself. I suggested that I needed to exaggerate to get the proper emotions. Yuyi was hesitant to agree. Perhaps she was imagining I would go overboard. We both agreed it would be better to tone down the illustrations if I went too far than to have them be flat. Knowing myself as I do, I didn't think that would be a problem.

I set to work, surrounding myself with dozens of beautifully illustrated picture books for inspiration and an equal number of reference photos to draw details from. I drew and re-drew and acted out each character's part in my mind. (No, I did not throw a tantrum on the Rec Center lawn.) Each tiny illustration took a surprising amount of time and even now, as I look at my finished revisions, I wonder if I should have exaggerated more!

I am posting the first storyboard I sent to Yuyi along with the revisions I sent a couple days ago, so you can see the difference between the two. I also made the thumbnails a bit bigger so it was easier to indicate the environment and the difference in size between the serpent and the main character. The first storyboard page spreads were 2.375" x 1.5" and the new ones are 3" x 2.875". Just that little bit made a big difference. 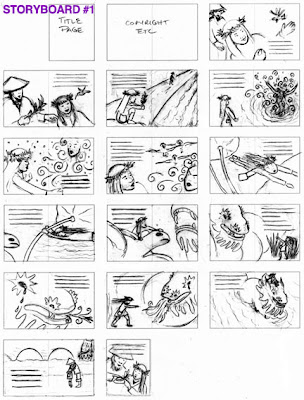 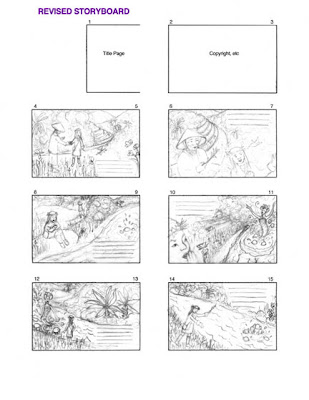 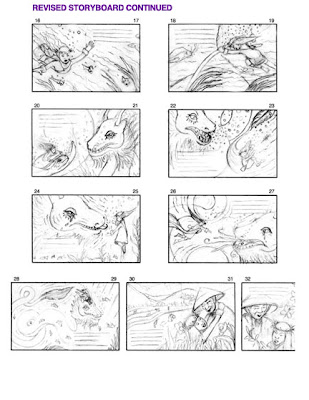 As usual, I showed my work to my daughter before I sent it off to Yuyi. She always likes what I do, but this time she became more animated in response to the new energy in the storyboard. Animated enough? I don't know. Stay tuned.

If you are viewing this post from outside of it's originating blog, you can read it in its proper surroundings at http://www.aJourneyIllustrated.com.
Email ThisBlogThis!Share to TwitterShare to FacebookShare to Pinterest Posted by A Journey Illustrated at 8:36 AM